How Much Bigger is Walt Disney World than Disneyland?

In 1955, Anaheim, CA, Disneyland opened its gates and gave the world an inside look into the magic of Disney. Over 60 years later, the Disneyland empire has expanded to included not only Disneyland® Resort, but also Disney California Adventure and Walt Disney World in Florida, not to mention other resorts across the globe.

The Disneyland® parks attract millions of visitors every year and continue to captivate guests with magical rides and enchanting attractions, making Disneyland tickets one of the best vacation investments around. But, if you are planning a visit to one of the amazing Disneyland® parks, it can be difficult to choose which one is best. One of the questions that many guests ask before choosing is “How much bigger is Walt Disney World than Disneyland?”

Book Now
While the sheer size of Walt Disney World at 40 square miles far surpasses Disneyland® Resort, the best way to decide which park to visit is by taking a look at how much magic they can fit inside those parks in terms of rides, shows and other attractions.

Compared to its bigger brother park, Disneyland® Resort measures up at just 500 acres but this small park packs a mighty punch when it comes to fitting in the most Disney magic. Comprised of two separate parks, with entrances located just 400 ft apart, Disneyland® Resort is ideal for visitors looking for the complete Disney experience in a short amount of time.

Disneyland park is the original Happiest Place on Earth and spans 85 acres. It is divided into 8 magical “lands” which boast over 50 rides and attractions including iconic originals such as Sleeping Beauty Castle, the Haunted Mansion and the Pirates of the Caribbean ride that spawned the hugely successful franchise.

Adventure land is down the first street off Main Street, U.S.A, the primary path through the park. Here you will find an intoxicating blend of African, Middle Eastern and Polynesian scenery and one of the best rides at the park, Indiana Jones Adventure.

Critter Country was designed to feel like the grand Northwest, and with the addition of Winne the Pooh later on, the Imagineers decided to give the whole land a cartoon background feeling. This part of the park also contains one of the most popular and iconic rides, Splash Mountain, the dark flume ride that takes you through backwoods and swamps and drops you down until you are soaked.

Fantasyland is called by many “the heart of the park”; a quaint alpine village spreading gracefully beneath Sleeping Beauty Castle and housing some of the most enchanting rides in the park including Peter Pan’s Flight, It’s a Small World After All and Dumbo the Flying Elephant.

Originally designed as the largest part of the park, Frontierland capitalized on the 1950s obsession with the “Wild West”. Here you will find the location of the spectacular lights display, Fantasmic! – a must-see experience during your visit.

Mickey’s Toontown was inspired by the beloved animated film, Who Framed Roger Rabbit? And immerses guests in a world of wacky cartoon characters with miniaturized building and landscapes and plenty of zany gags.

New Orleans Square was built with the finest attention to detail to mimic the real-life place as it was during the Civil War. It also contains the two most iconic rides at the park, Pirates of the Caribbean and the Haunted Mansion.

Tomorrowland is a whimsical vision of the future as imagined by the scientists of the 1930s, and after riding on Space Mountain you will be feeling a little nostalgia for the “Future that never was”.

Finally, as of 2019, Disneyland Park has expanded to include an additional land, Star Wars: Galaxy’s Edge a completely immersive experience in the land of Batuu where resistance fighters and members of the Red Fury patrol opposing ends of the land and where you can experience galactic rides like Millennium Falcon: Smuggler’s Run and Rise of the Resistance.

After opening in 2001 to capitalize on the popularity of the Disney parks and accommodate the ever increasing crowds, Disney California Adventure faced some criticism from people who felt the park did not keep up with the standards set by previous Disney theme parks. However, after an intense overhaul and rebranding campaign, Disney California Adventure now features some of Disneyland® Resort most popular attractions and hosts many of the resort’s special events and attracts over 8 million visitors per year.

Like Disneyland, Disney California Adventure is comprising of different lands. The six areas that span 3 million square feet are home to many of Disney’s contemporary creations including fan-favorite, Pixar Pier.

Pixar Pier is one of the newest additions to the park and represents all of the Pixar characters not already a part of Cars Land. It is made up of four Pixar-themed neighborhoods including Inside Out, The Incredibles, home of the thrilling Incredi-coaster, and Toy Story, the location of Toy Story Midway Mania! The highly popular interactive ride. There is also a fourth neighborhood where the rest of your favorite Pixar characters are represented.

Buena Vista Street is the central activity hub of the park where you can find amazing shopping and dining opportunities and enjoy some Disney history with a storytelling statue and replica of the Carthay Circle theatre where Snow White and the Seven Dwarfs for premiered.

Cars Lands is the crown jewel of the park’s epic transformation, creating a completely immersive entertainment experience with gargantuan mountain backdrops and recreations of everyone’s favorite places in Radiators Springs that make you feel as though you have stepped through a movie screen.

The huge bear-shaped rock formation known as Grizzly Peak is the location of some of the parks more thrilling fare including Grizzly River Run, a white water rapids ride and Soarin’ Around the World which uses 3D technology to transport you to famous places around the globe.

Hollywood Land represents the incredible contribution that Disney has made to the screen in recent years and contains most of the park’s attractions including the unmissable Guardians of the Galaxy: Mission – Breakout! As well as live Frozen shows and the Sorcerer’s Workshop.

The smallest area of the park is Pacific Wharf which his predominantly a dining and bar area with a wonderful tour of the Bakery. Disney California Adventure is also home to Paradise Gardens, though not a specific “land”, it is the location of many of Disneyland® Resort’s special events.

If you decide to visit Walt Disney World, you will be stunned at the sheer size of the place. Spanning over 40 square miles, the expansive world incorporates four different theme parks, each divided into different lands, as well as two amazing water parks and employs 74,000 cast members. And with 4000 acres devoted to lush landscapes and more than 25 resorts for guest to stay at, you will need more than a single visit to experience the whole place properly.

The Magic Kingdom officially ranks as the most popular theme park on Earth with over 17.5 million visitors pouring through the gates every year. It also contains over 40 different attractions within the park alone including some of the most iconic rides of all time.

The Magic Kingdom is based directly off the plan for Disneyland Park, though it takes up more space at 105 acres, and features many of the same lands and rides including Pirates of the Caribbean, though shorter than the original, Splash Mountain and the ever-popular, Haunted Mansion.

Epcot is the second largest of the Disney theme parks at Walt Disney World at 300 acres and sees 11 million visitors annually. What started out as a futuristic experiment has now become effectively two separate but integrated parks, Future World with a focus on science, space travel and marine life, and Epcot World’s Showcase which features dining pavilions from countries all over the world.

Though predominantly home to interesting exhibitions, parades and dining, there are still a few thrill rides for guests including the high speed, Test Track, Mission: Space and Spaceship Earth. You can also find amazing live shows at Epcot including Frozen Ever After.

Ranked by area, at 403 acres, Disney’s Animal Kingdom is the largest theme park in the world, and it has to be to house all those incredible animal exhibits and immersive attractions.

It is also the newest Disney World park having only opened in 1998. The park features 20 rides and attractions; fewer than many of the other Disney parks. However, many of the rides are sprawling adventures that require plenty of space for a truly immersive experience.

One of the most popular rides at the park is Avatar: Flight of Passage which transports guests to the mind-boggling bioluminescent world of Pandora from the film Avatar where guests ride on the back of a banshee through a stunning 3D adventure.

Another two unmissable rides are Expedition Everest, a white-knuckle rollercoaster ride through the Himalayas, and of course, Kilimanjaro Safari where guests can experience the wildlife of the savannah at Harambe Wildlife Reserve.

Disney’s Hollywood Studios is a film lover’s dream park featuring some of Disney’s most spectacular movie moments. The park sees approximately 10 million visitors a year and while not the biggest park of the bunch, you certainly get a lot of bang for your buck.

One of the top attractions at Disney’s Hollywood Studios is Toy Story Mania! A high-energy interactive ride that spins guest between games to compete with each other for high scores.

If you want to beat the heat during a summer visit the best way to cool of is at Blizzard Beach, the largest of Disney’s water parks at 66 acres. This water park has a “Melting Ski Resort” theme and boasts 20 attractions including the tallest and fastest water slide in Florida, Summit Plummet. Many guests consider this ride the most thrilling of all at Walt Disney World with it 12 story near vertical drop.

For guests that don’t want a side of terror with their visit, there is a three course water course, Snow Stormers, where guests ride on rubber mats down the gentle slopes.

Tropical-themed Typhoon Lagoon is the second of Disney’s water parks and offers one of the most immersive attractions at any of the park with guest given the opportunity to swim with real marine life, including small sharks, at Shark Reef. It also features the largest wave pool in the country where guests can book surfing lessons.

Due to the difference in size, proximity of attractions and location, different ticket packages are better suited to experiencing Disneyland® Resort and Walt Disney World.

Ideally if you want to truly get the most out of a visit to Walt Disney World, you need to stay for a few days or visit select parks. In which case, a 1 park per day ticket to Walt Disney World allows to you enjoy all the attractions at a single park of your choice. You can purchase single day ticket for stays from 2 to 10 days and visit a different park each day of your visit.

If you want to visit the water parks at Walt Disney World during your stay you will need to buy a separate ticket unless you upgrade your ticket to a Park Hopper Plus which gives you access to all theme parks and water parks in a single day.

Because Disneyland Park and Disney California Adventure are located so close to each other, it is much easier to go park hopping and enjoy both parks in a single day., so a Disneyland® Resort ticket with a Park Hopper upgrade is ideal.

Whether you want to experience the nostalgia and magic of the original Disneyland® Resort or marvel at the magnificent mini-city that is Walt Disney World, Disney offers incredible attractions for all guests regardless of the size of the park. Call 1 (800) 434-7894 (international callers use +1 (619) 546-5622) to speak with an aRes Travel planning expert seven days a week, or book online now. 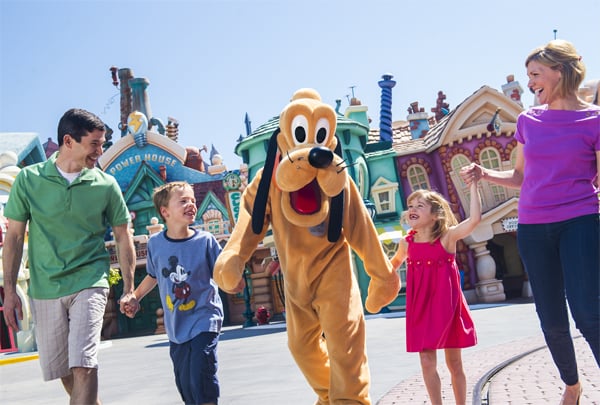