Perfect for movie fans all over the world, Universal Studios Hollywood™ California is a top destination for experiencing the wonders of filmmaking.

Universal Studios Hollywood™ California is located in Los Angeles, the beating heart of the film industry. Visitors can explore the studios where movies are made, enter the world of their favorite films, or jump on a 3D thrill ride.

So Much to See at Universal Studios Hollywood™

In 2018, Universal Studios Hollywood™ opened the new DreamWorks Theatre. Watch your favorite DreamWorks movies with 180-degree special effects and 360-degree surround sound. This immersive experience will make you feel as if you are a part of the movie.

Whether you love horror films or just enjoy a good scare, Universal Studios Hollywood™ celebrates the things that make us scream during its Halloween Horror Nights. Last year’s horror spectacular featured an all-new Stranger Things-themed maze that took visitors through the town of Hawkins and into the Upside Down.

Once they made their way out of the maze, visitors could jump on the Terror Tram and enter the world of the phantom clown, Hollywood Harry, to hear five scary bedtimes stories. Who knows what spooktacular delights are in store this year?

See the Magic Behind the Movies

While Universal Studios Hollywood™ is home to exciting attractions and events, it is also a real studio where blockbuster movies are created. Join the World-Famous Studio Tour, narrated by Jimmy Fallon to learn about set-design, experience King Kong 360 3-D , survive an earthquake, and go on a high-speed chase in Fast & Furious – Supercharged.

If that isn’t enough, visit the Universal Studios Hollywood™ backlot and real sound stages with the park’s VIP Experience package. Visitors will feel like a VIP with expert guides and express access to popular attractions.

For amazing savings on cheap Universal Studios Hollywood™ tickets, exclusive deals on packages, hotels, and some of the lowest prices on travel, call 1 (800) 434-7894 (international callers use +1 (619) 546-5622) to speak with an aRes Travel planning expert seven days a week, or book online now. 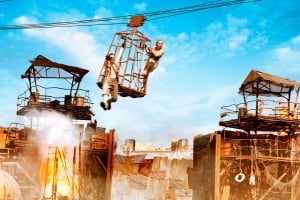