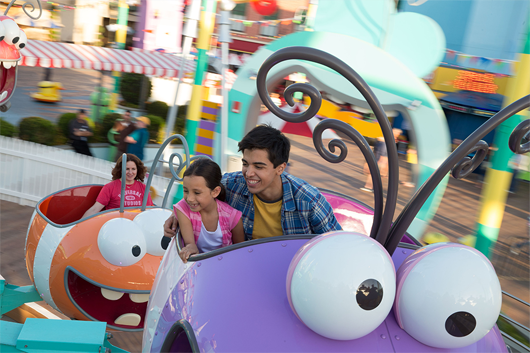 See the Action Up-Close and Personal

You’ll get taken behind-the-scenes of a working studio on the Studio Tour, where a tram transports you through the biggest set construction project in history.

Book Now
You’ll see the lot where more television shows and movies have been filmed than anywhere else in the world and come face-to-face with the wondrous King Kong in the fully immersive King Kong 360 3D experience.
And for the finale, enter the exhilarating world of fast cars and international crime on a high-speed car chase in the incredibly realistic Fast & Furious Supercharged 3D/4D experience.

Get engulfed in the awesome world of Master Po and find your inner hero at the state-of-the-art multi-sensory Kung Foo Panda attraction.
If that isn’t exciting enough, put yourself into the middle of the ultimate war zone alongside Optimus Prime and Bumblebee at Transformers™: The Ride 3-d.
Round off your day with the cuteness of Universal’s Animal Actors and see some of Hollywood’s best animal trainers and their furry friends display some of their best tricks. You might even get the chance to join them on stage.
For exclusive deals on inexpensive Universal Studios Hollywood™ California Tickets, amazing savings, and some of the lowest prices on travel, call 1 (800) 434-7894 (international callers use +1 (619) 546-5622) to speak with an aRes Travel planning expert seven days a week, or book online now.