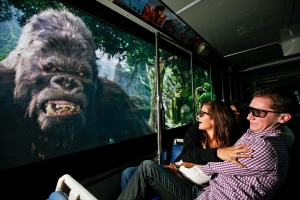 Universal Studios Hollywood™ packs so much fun and excitement into one theme park, the real challenge is simply having enough time to see and do it all!

Armed with one of aRes Travel’s Universal Studios™ packages with hotel and tickets, you can rest assured that you will be providing your family with the best vacation at the best value. You won’t find lower prices anywhere else!

There are countless ways to have fun at Universal Studios Hollywood™. At times, it will seem like the thrills and excitement are non-stop and limitless.

First, there is the signature movie Studio Tour, where some of the most popular movies in history have been filmed. The Studio Tour is topped off with the Fast & Furious — Supercharged grand finale.

Then there are the theme park rides, like Despicable Me Minion Mayhem, a 3D motion-simulated obstacle course, and The Simpsons Ride, a roller coaster ride with the world’s most famous family.

The newest attraction at Universal Studios Hollywood™ is the DreamWorks Theater, a 3D cinema experience that blows the entire concept out of the water.

Last but by no means least, one of the biggest draws to Universal Studios Hollywood™ is the Wizarding World of Harry Potter™ section. Jump on the Harry Potter and the Forbidden Journey™ ride and the Flight of the Hippogriff™ roller coaster. Don’t forget to pick up your very own wand first!

When you reserve one of aRes Travel’s Universal Studios™ packages with hotel and tickets, you can enjoy all this and more ― for less! Our package offers include the ability to combine visits to two or more attractions in California like our Universal Studios Hollywood™ and Disneyland® Resort Park Hopper® combo deal.

Alternatively, if your dream vacation is calling you to Florida instead, talk to one of our planning agents about our incredible package deals for Universal Studios Orlando™.