How to take advantage of Kids Free San Diego 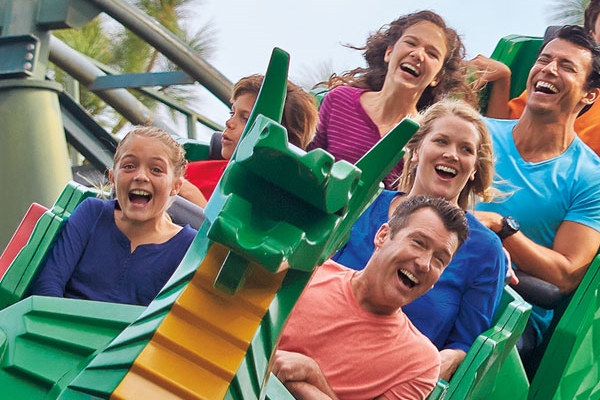 San Diego is one of the most beautiful cities in America. It’s warm and sunny, has great natural attractions, fantastic beaches, and so many fun things and adventures to do. Experiencing San Diego is also a great thing to experience as a family.

You and your children will have an absolute blast with enough to interest adults and keep kids entertained, and just when you thought San Diego could not get any better, it has.

During the entire month of October, kids go free to hundreds of attractions in San Diego. Theme parks, museums, restaurants, zoos, and aquariums are all available for free in select locations around San Diego.

LEGOLAND® represents one of the very best deals you can get out of Kids Free San Diego. The park is already a hot place to be during the month of October due to its Brick-or-Treat party nights. October is the perfect time to take advantage of Kids Free San Diego to get into the park at a great discount.

Kids 12 and under get into the park completely free when accompanied by a paid adult. There is no better month to visit LEGOLAND® so why not get the kids in for free?

LEGOLAND® in October is a totally awesome experience. The park celebrates the spooky season all month long with fun Halloween decorations and events. The entire area is adorned in creepy cobwebs and Jack-o-Lanterns dot the premises.

Your favorite monstrous LEGO® characters are lurking about as well and can be found for meet and greet as well as photo opportunities. Keep your eyes peeled for Lord Vampyre or LEGO® Mummy and LEGO® Frankenstein. Visit the costume store if you want to get in on Halloween fun as well.

Running around the park is hungry work too, so be sure to stop by the cafe at the park and other food vendors for special Halloween treats. There will also be treated trails and stations as well as spots throughout the park passing out candy for even more delicious Halloween mischief.

There are special events to participate in like building your own LEGO® Jack-o-Lantern. Of course, there will also be more candy and treats. On select nights there is also a delightfully eerie firework show after-hours that lights up the entire park.

SeaWorld® San Diego is another premium park experience for the whole family that can be made less expensive by utilizing the benefits of Kids Free San Diego. Kids 9 and under can get into SeaWorld® absolutely free when accompanied by a paid adult. The deal is only sweetened by the inclusion of access to Aquatica as well, SeaWorld® ‘s adjacent water park and splash playground. You cannot beat this deal if you are looking for a day of thrills, incredible animal encounters, and a super fun way to cool down in the heat and splash away to your heart’s content.

SeaWorld® also features some pretty incredible under the park’s care. The Killer Whale encounter is an absolutely breathtaking experience that will leave you with a newfound respect for the majestic creatures. View the Orcas up close through a special viewing area that looks right in on their enclosure.

Dolphins, otters, and penguins are other popular animals to check out at SeaWorld. These playful creatures are definitely worth paying visits to. They frolic and play and are not usually short on energy. Dolphins are extremely friendly, and guests will even have the opportunity to get up close with the Dolphins and even touch them. You can learn more about the Dolphins with their trainers and may even be able to feed them a treat!

Aquatica is also a great opportunity to cool down after walking around the park all day in the hot San Diego sun. The water park has numerous play areas and structures that the kids will love to explore. There are lounging areas for kicking back with a refreshing beverage and a book or water slides that will keep the fun going all day.

Not taking advantage of the museum offers during Kids Free San Diego would be a major waste. Tons of local museums participate in the event and love to get the community involved. There is a wide variety of experiences to be had with the number of museums that are participating, from art museums to historical and nature museums, to museums all about science. The museum community is a big part of the community so supporting it is always a win. There is truly something for everyone and every interest and it has never been so cost efficient to experience all that the many museums of San Diego have to offer. Up to two kids, 12 and under can gain free admission to any participating museum when accompanied by a paid adult.

The San Diego National History Museum, known by the locals as the Nat, is an awesome museum located in Balboa Park, meaning it is within walking distance from a bunch of other worthwhile attractions and events. The prestigious Nat was founded in 1874 and is Southern California’s oldest scientific institution of its kind. There are often many fun events going on during the week in addition to the museum’s regular round-up of stellar exhibits and features. The new Cerutti Mastodon Discovery exhibit shows guests an Ice-Age excavation site that was dug up staff at the museum. The site features and preserves mastodon bones that are 130,000 years old. The museum also features numerous dinosaur fossils dug up nearby in the state of California. Another stand out exhibition is the museum’s large collection of gemstones and precious minerals. They will literally dazzle guests as they marvel at the beautiful colors and hues of these fantastic crystalline structures.

The incredibly inspiring naval aircraft carrier turned historical museum, the USS Midway is a must-see attraction for anyone in San Diego. Experience a true slice of American history and heroism as you relive the stunning events that turned the tide of the conflict in the Pacific during World War II. The carrier is located in downtown San Diego at the Navy Pier. There are many restored aircraft aboard the vessel, many of which were constructed locally in the state of California. In the hangar deck, you will be able to view real restored World War II-era fighter planes and even climb inside the cockpit to get a feel for what U.S. airmen would have worked with during the War. Above on the flight deck, there are more modern fighter jets that you can pose by and take pictures of. For history buff or fans of movies like Top Gun, this is one museum that you will not be able to pass up. The excitement doesn’t end there though. The USS Midway also has many interactive exhibits and experiences on-site such as flight simulators and The Battle of Midway Theater that transports you back in time and puts you in the very thick of the action during the battles in the Pacific Theater.

There is also an abundance of art museums for a quieter and more introspective experience. San Diego’s contemporary art scene is widely celebrated, but the exhibits also feature some gorgeous older pieces as well. The San Diego Museum of Art located in Balboa Park for example house a wide variety of pieces, but has particular excellence in showcasing some great classical Spanish art. The museum also features exhibitions such as the Abstract Revolution showcasing more modern sensibilities and experimental artistic pursuits, as well as exhibitions like Black Life. Black Life is a series of photos that feature prominent African-American figures who impacted Southern California over the decades. Their Visible Vaults section also gives viewers access to pieces that would normally be under lock and key, featuring hidden masterpieces, some of which are quite old and valued.

San Diego is known for many great things but one of its greatest points of pride is in the world-class San Diego Zoo. The San Diego Zoo was voted the best zoo in the entire world in TripAdvisor’s Travelers Choice Awards, and Kids Free San Diego is giving you the opportunity to take your kids to this spectacular place for free! A single ticket adult can bring up to 10 kids who are 11 and under, making this one of the best deals to be found across the board for Kids Free San Diego.

The Zoo itself, located in Balboa Park, is massive with approximately 100 acres of land devoted to the care of the animals housed on-site. The Zoo is home to over 3,500 kinds of animals and there are over 65o species and subspecies present within its walls. The Zoo is also famous for having an enclosure dedicated to the rare and endangered Giant Pandas, as well as its care for Rhinos which are also increasingly endangered in the wild.

Some of the other awesome animals that can be viewed at the San Diego Zoo include spotty Leopards, scaly Anacondas, super cute Arctic Foxes, chill Camels, and playful Elephants. These are only a very small sample of all the critters and beasts the Zoo has to offer up. If you are visiting you will want to stay for the day so you can experience it all.

There are also some fun attractions and interactive events to be explored at the San Diego Zoo. Inside look tours and the Animals in Action Experience both give you a closer look into the Zoo itself and the fascinating lives of the animals that live there. Pictures are encouraged so you will be able to snapshots and create memories with your family that will last a lifetime. There are also some drop-dead gorgeous botanical tours that will allow you to explore the Zoo’s incredible collection of flora. You will be stunned by the colorful beauty and variety featured in the Zoo’s flowers and plants.

Eating out is an important part of the San Diego experience whether you are a local or are visiting. Kids Free San Diego is here again to make sure your quality dining experience doesn’t break the bank. A number of great venues are participating so be sure to check and see whether your intended dining location is participating before you go. So notable highlights include Galaxy Taco in La Jolla which offers kids combos for free for two kids 12 and under accompanied by a paid adult. Tacos are already fantastic and Galaxy makes them even better with some fancier flourishes.