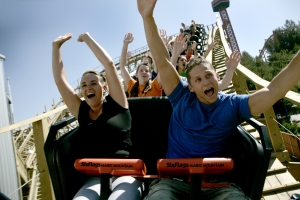 Strap in and hold on because Six Flags Magic Mountain has thrills and surprises around every high-speed corner! As the premier roller coaster destination on the West Coast, adrenaline junkies will rejoice at Magic Mountain’s world record-holding number of high-intensity rides.

Six Flags Magic Mountain has a bevy of world-record-setting rides. The iconic New Revolution steel coaster set the first record in 1976, not only as the first vertical looping roller coaster but also the tallest!

The records don’t stop there. SUPERMAN: Escape from Krypton is one of the first coasters to reach a death-defying top speed of 100 miles per hour. There’s THE RIDDLER’S Revenge, ranked as the tallest, longest, and fastest stand-up coaster in the world.

Goliath set the record for the world’s longest and fastest initial drop of 255 feet. The X2, was ranked the seventh best coaster in the world by the Golden Ticket Awards. It is also the world’s first 4D coaster, with flipping seats, fog, and fire effects!

Don’t have the stomach for the Twisted Colossus or the Road Runner Express? Don’t worry, Six Flags Magic Mountain has you covered. You can ride the swinging pirate ship, the Buccaneer, race go-karts around the Cyclone 500 track, or ride the Honda Express railway around the park.

Into the classics? Check out the Jammin’ Bumpers bumper cars, the iconic Scrambler, or Magic Mountain’s antique Grand American Carousel, a ride with origins dating all the way back to 1912!

The Most Thrilling Vacation Around

If you’re tired of the same old ho-hum family vacations, Six Flags Magic Mountain is your ticket to non-stop thrills and excitement!

For amazing savings on cheap Six Flags Magic Mountain tickets, exclusive deals on hotels and packages, and giant discounts on call 1 (800) 434-7894 (international callers use +1 (619) 546-5622) to speak with an aRes Travel planning expert seven days a week, or book online now. 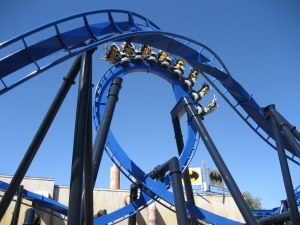