What Other Theme Parks Are Near Universal Studios Hollywood™?

The Walt Disney theme parks are some of the most famous in the world – and two of them are just across town from Universal Studios Hollywood™. Disneyland® Park is the more popular of the two, with some 18 million visitors per year. It’s home to Space Mountain, the Electric Parade, and dozens of other attractions. It was opened back in 1955, so it has a long and rich history and a collection of iconic rides.

Despite the park’s age, it has a lot of modern attractions to offer. One of the most popular attractions is Star Wars: Galaxy’s Edge, which gives fans of the movies a truly immersive experience. The Indiana Jones Adventure is another fan-favorite with great special effects. If the weather’s warm enough, get on the Splash Mountain water ride to cool off.

With eight themed areas inside the park, you can easily spend a few days at Disneyland® Park. Even if your group consists of older teens and adults, why not take plenty of time to bask in the nostalgia?

Disney California Adventure® Park was just opened in 2001, but it’s already incredibly popular. It hosts a number of attractions based on Pixar movies, like A Bug’s Life and Cars. Its trademark nighttime show is World of Color, a light and water show featuring scenes from Disney movies projected onto a giant fountain.

Thrill-seeking and thrill-averse fans alike will find plenty to find here. The Incredicoaster travels over 6,000 feet and has enough drops and high-speed launches to satisfy most coaster fans. Soarin’ Around the World is a must-see thanks to its incredible high-resolution images from around the world. After dark, Radiator Springs Racers offers a surprisingly fun car ride experience for the whole family.

You can easily access both Disneyland® Resort parks on the same day with a Park Hopper® pass, or buy separate day tickets for one or both parks. The flexibility in ticketing makes the Disneyland® Resort an excellent addition to your trip to Los Angeles.

Don’t let the name fool you – Knott’s Berry Farm started out as a farm, but now it has a lot more to offer! Their most famous roller coaster is probably Supreme Scream, which sends riders 252 feet straight into the air before sending them straight back down. The vertical drop is not for the faint of heart!

In addition to roller coasters and thrill rides, Knott’s has shows and entertainment for the whole family. You can check out the Camp Snoopy Theatre show, the Wagon Camp stunt show, or a range of other shows offered multiple times per day. The park is also known for its delicious food and has enough meal options to satisfy even the pickiest eaters.

Right across the street, you’ll find Knott’s Soak City water park, which has 22 slides to choose from. Though it’s only open in the summer, it’s well worth making time for. To make things even more convenient, Knott’s operates a hotel next to both of its parks.

With a convenient location northwest of Universal Studios Hollywood™, Six Flags Magic Mountain is easy to add on to your trip. There are more rides, attractions, shows, and character meet-and-greets than anyone could possibly experience in an entire day. The park sprawls across 262 acres, so it rarely feels crowded.

The best ride for thrill-seekers is the Twisted Colossus, which has a unique combination of twists and turns to disorient its riders. If you’re not afraid of heights, try CraZanity, a 17-story pendulum ride visible from miles away. Visitors of all ages can enjoy tamer attractions like the bumper cars and white-water rafting ride.

Since Magic Mountain is open year-round, it has fun seasonal events like Fright Fest and Holiday in the Park. No matter what kind of group you’re bringing, Magic Mountain is sure to make lasting memories for you.

Right next to Magic Mountain, you’ll find a vibrant waterpark full of water slides, pools, and a beautiful lazy river. Hurricane Harbor has something for everyone, whether you’re the ultimate thrill-seeker or a mom trying to entertain toddlers, so it’s great for groups. Pools and the lazy river are always an option for parents or kids who are scared of water slides.

Hurricane Harbor is probably most famous for its intimidating, record-setting tangle of enclosed slides called Black Snake Summit. Two of the slides allow side-by-side racing in rafts, while the highest two slides don’t allow you the security of a raft. If those sound too intense for you, the Bonzai Pipes are a slightly less stressful adventure.

Once you’re tired of swimming, there are plenty of shopping and dining venues. The park’s ample size means it never feels too crowded, so it’s a great destination even during the peak tourist season in the summer. Like many water parks, Hurricane Harbor is only open during the warmer months, so don’t miss out!

If you want to feel the sea breeze in your hair while you ride roller coasters and a giant Ferris Wheel, this is the place for you! As its name implies, Pacific Park is located right on the Pacific Ocean, giving you fantastic views of both the city and the sea. It has a retro amusement park vibe thanks to its smaller size and abundance of games.

The park has a wide range of rides for kids but also has enough thrill rides to keep older riders happy. Make sure to check out Pacific Plunge, which offers you great views of the park before dropping you right back down to earth!

Since the park is located so close to the beach, it’s easily accessible to families who want to split their time between Universal Studios Hollywood™ and the beach. It’s also a great Plan B in case weather conditions aren’t ideal on the day you were planning to swim.

Adventure City is designed to appeal to families with young children, but it can still provide a relaxing day out for older children. Parents rave about the short wait times, easy parking, and lack of crowds. There is a wide range of classic amusement park attractions with an abundance of cute characters, plus a petting zoo with a variety of animals. The staff is friendly and helpful, making this a nearly stress-free experience for busy parents.

Rewind Racers is the best roller coaster in the park and is a nice break from the more intense rides other amusement parks have to offer. There are also swinging and spinning rides that even small children can enjoy. Older kids will love the rock climbing wall and the arcade.

All in all, Adventure City is a great theme park to visit, especially if your little ones get a little overwhelmed at Universal Studios Hollywood™. 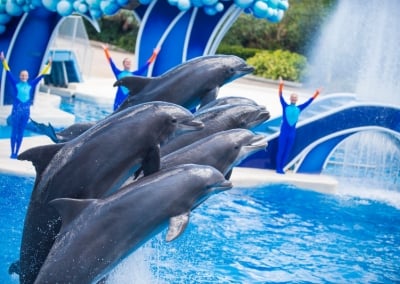 SeaWorld Orlando: Best Rides for Children 10 and under – aRes Travel